Summary of Diversify’s Event with Network for Work

Event name: How to Showcase and Leverage your Skills in the Norwegian Job Market
Co-hosts: Diversify and Network for Work
Date: August 28, 2019

This very interesting and engaging event was broken up into two main parts. The first part was a 40-minute panel session moderated by the brilliant Michell Mpike. And the second part was a Masterclass session where each panelist discussed her own experience with integrating and succeeding in Norway. They each provided practical tips and discussed what worked for them – by showcasing their respective point of views. Based on the audience feedback received, we can proudly say that the audience found the entire event and session useful.

This write-up aims to provide a summary of the 40-minute panel moderated by Michell.

The structure of the panel conversation was fluid and Michell Mpike did a great job in asking poignant questions. And while some questions where directed to specific panel speakers, there was an opportunity for the other panelists to contribute supporting or opposing ideas.

Nikol Mard, Founder of Network for Work, spoke from her experience as a trailing spouse to her partner who had secured employment in Norway. Nadia Ahmed, from the window of moving to Norway from the United States as a work expat and eventually settling in Norway with a partner. And Chisom Udeze, moved to Norway because of her Norwegian partner (although not as a trailing spouse), as she had already secured employment as a skilled worker through which she applied for a resident permit.

Each panelist acknowledged the structural difficulties limiting opportunities for foreign workers.  Moreover, having a strong command of the Norwegian language or having a Norwegian degree does not necessarily guarantee a job. Nikol argues that instead, having a strong network is more likely to get one a job rather than educational qualifications. Based on her own experience, she was able to secure an interview, not because she was qualified for the job, but because she was referred by someone in her network. This realization was also what led her to establish Network for Work.

The panelists also saw similarities in their struggles even though they had different situations. For Chisom, although she had a job and had subsequently established her own consulting company, she was unhappy and fell into a depression for her perceived lack of ability to transcend the emotional difficulties she encountered. For Nikol, also unhappy with her professional situation, she initially placed the blame of her perceived lack of success on herself. In essence, they both struggled with integrating and adapting in their new home.

When asked what to do in a bid to secure a job in Norway, our three panelists advised that one must begin looking for work in Norway before they move, since the process takes a long time. In other words, the earlier you start, the better. Nada, who came to Norway with a job 8 years ago believes that in the end, your qualifications matters less than your ability. She advocates the ability to adequately present oneself.

While labor market issues are prevalent across most countries in the world, the panelists argued that there is some specificity with the Norwegian market that makes it especially difficult for skilled workers, particularly when they are not seemingly ethnic Norwegians. All three spoke against the detrimental impacts of fitting an expected construct or restricting oneself to fit into a perceived box assigned by society.

On supporting mechanisms that facilitates unconscious biases for immigrant job seekers, it should not be common practice that people request to get your full biometric and personal information in other to consider you for a job. And while we have heard of companies asking for these in Norway, the panelists believe that this might inadvertently perpetuate unconscious biases that leads to discrimination and further inability to secure work in Norway.

Nikol believes that the startup scene is much more open to diversity and international teams, even though many companies in the startup space have financial constraints. Nikol advocates taking up unpaid work where possible as it could be a great starting point to building a network. She did however acknowledge that the ability to work unpaid is very much dependent on one’s life situation. Some people have the opportunity to take up unpaid work, whereas, others do not. Chisom added that when taking up unpaid or volunteer positions, it is useful to ensure that assigned roles can add value to your resumé. So, while you may not be earning an income, you are building skills that match your qualification, experiences and skills, and might lead to your ideal future job. She nonetheless believes that every organization should provide a minimum stipend to volunteers and interns that covers their transport and lunch, so job seekers do not spend the little income reserves they have.

Nada added that it is certainly wise to accept temporary positions in the interim and be creative in how to engage in the job market. Chisom continued that it is wise to also explore other ways to earn an income whilst waiting for the ideal full-time job. Herein, one’s income earning options should not be limited to Norway. Can you teach English or another language online? (Opportunities for online teaching abounds – in Asian countries for example). She also argued for starting your own company if possible (that caters to a foreign market) or becoming a project-based consultant using skills and network acquired elsewhere before you moved you Norway.

Chisom, Nada and Nikol all agreed that one must be thoughtful about professional opportunities and ensure that (unpaid) roles and positions are not taken out of desperation as some organizations have the propensity to take advantage of skilled immigrant workers.

Nada acknowledged that Norway does (relatively) provide a lot of support for foreigners, whereas Nikol argued that these support systems are limited to Asylum seekers or refugees. These support unfortunately are rarely for EU citizens, or highly skilled immigrants, trailing spouses, repats and the like.  According to Nikol, diversity and inclusion are looked at more as a problem than a strength. Herein, diversity means gender equality. Chisom echoed Nikol by agreeing that diversity often means equal amounts of men and women of the same nationality and race represented on boards and companies. She continued that the Norwegian society seemingly has not figured out what to do with highly skilled non-Norwegians – and from a socio-economic perspective, this is both as unsettling as it is discouraging.

More needs to be done to raise awareness of the issue. Because on paper, Norway might look like a fantastic country to move to for immigrants, but in practice, it is quite difficult – irrespective of individual will to succeed, learn the language and integrate. Unfortunately, the work on raising awareness on integration and inclusion in Norway is done mainly by foreigners who have encountered the problem themselves, and while this is a step in the right direction, we need Norwegian people and businesses to join the dialogue. Chisom notes that while there is engagement on the dialogue, the change is happening at snail pace. When asked what must be done to bring about the much-needed change in this space, Chisom argued that change needs to come from companies and institutions alike. The government needs to acknowledge there is a problem and work with Norwegian companies to begin to find sustainable solutions to solving the problems. She proposed some form of light affirmative action, for lack of a better way to phrase it. Herein, what she meant was that relevant stakeholders could mandate to have a minimum of 9% of their staff be a skilled immigrant worker for example (who is qualified for the job – no handouts!). Not just to be inclusive and mark their diversity quota, but also because these qualified skilled workers add enormous value to businesses.

Nada added that a form of this is already been done in Norway, where gender equality is concerned and the need to have a gender balance in the workplace. So, to do something similar for skilled and qualified immigrant workers, even to a lesser degree, could be smart. She also suggested the need to undertake more studies of diversity at the workplace. She cited the study conducted by Boston Consulting Group, which shows that increasing diversity has a direct increase on the bottom line. Herein, companies with a more diverse management team have 19% higher revenue that results from innovation.

On practical tips to securing employment or growing one’s network, Chisom suggested reaching out to Norwegians via Linkedin.  Executives in Norway are relatively more accessible that executives elsewhere. Many of them will meet with you if your reach out. So, reach out and ask for a coffee meeting. Perhaps you can pick their brains and learn something that could aid you in the job market, at the very least you’d be increasing your network.

Nikol agreed and added that it is not what you know, but who you know. And it was important to allow your true self show in the process. Nada concluded that by embracing our diversity, we begin to show that which is unique about us and this is something we should be proud of. 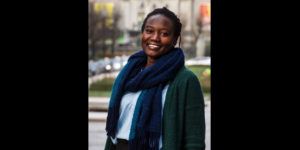 There are women and there is Dora Poni Loro. She is a force of nature, an endless source of motivation 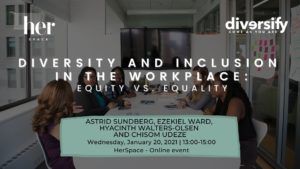 Reflection| Diversity and Inclusion in the Workplace: Equality vs Equity

On Wednesday 20th of January, Diversify held its second Diversity and Inclusion in the Workplace session, this time focusing on 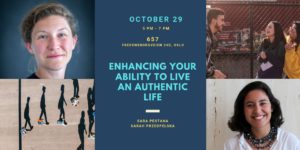